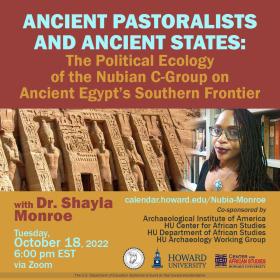 Dr. Monroe’s dissertation research explored the political ecology of the Egyptian colonial frontier in Lower Nubia.  She began with an investigation of the long-term relationship between climate change and cattle pastoralism in northeastern Africa and followed with a zooarchaeological analysis of the excavated cattle remains left by the Egyptians of Askut (c. 1850 – 1550 BC), one of several large military garrisons built to monitor and control pharaonic Egypt’s southern borders.  Her questions were largely focused on the local herders that provided cattle to the Second Cataract Forts, namely, the pastoralist Nubian C-Group, the previous occupants of the territories that were occupied by Egyptian forces. C-Group people represented a long tradition of non-state pastoralist groups who shaped the political ecology of borderlands between pharaonic Egypt and Kerma.  Dr. Monroe used the food refuse at Askut to explore the role of livestock exchange in the interactions between Egyptian colonists and C-Group Nubians. Through time, the bones tell a story of human response to climate change, cultural fragmentation, survival, and coerced assimilation that still resonates with the socio-political circumstances of African pastoralists in present times.

Dr. Shayla Monroe is a postdoctoral scholar in Anthropology at the University of California, Santa Barbara (UCSB), where she received her Ph.D. in 2021. She specializes in faunal analysis, the social zooarchaeology of Sudan and Egypt, and the archaeology of African pastoralism. Her dissertation analyzes the acquisition of cattle at the ancient Egyptian colonial fortress of Askut (c. 1850 – 1550 BC) and its implications for culture contact and asymmetrical power relations between pastoralists and non-pastoralists.  Monroe earned her M.A. in Anthropology from UCSB in 2015.  Since 2013, she has worked as an archaeologist at the 3rd Cataract of the Nile River in Sudan, first at the Egyptian colonial site at Tombos, and then at the Kerma hinterlands site, Abu Fatima, a site also located in northern Sudan.  Dr. Monroe is a Eugene Cota-Robles scholar and a recipient of the UC President’s Dissertation Year Fellowship. She served as a Graduate Mentor to underrepresented students at UCSB, helping to foster an ethnically and culturally diverse campus. Dr. Monroe began her career at Howard University, where she earned degrees in Anthropology and English (2012).  She also spent two seasons (2010 and 2011) working at L’Hermitage plantation (also known as the Best Farm Slave Village) with the National Park Service in Frederick, Maryland.